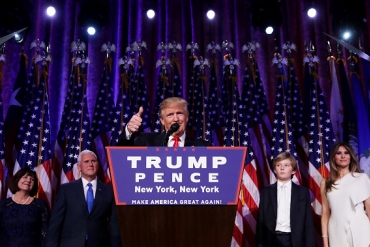 The Chronicle of Higher Education.

Like most academics, I was surprised to watch the election coverage Tuesday night and see the odds of Donald Trump winning the White House steadily rise throughout the evening. I had spent a lot more time thinking about the implications of a Clinton presidency for federal higher-education policy than a Trump presidency because of her detailed policy statements and consistent lead in most respected polls. But as fate would have it, I am spending the days after the election at the Association for the Study of Higher Education’s annual conference. Everyone is trying to figure out what happened Tuesday night and what it means for higher-education finance and accountability.

President-elect Trump may be best known in the higher-education world for his proposals to eliminate the U.S. Department of Education, a favorite idea among some Republicans ever since the department was established, in 1979. This is unlikely to happen — after all, it if were easy to do, the Reagan administration would have done it. But some functions of the Department of Education could be moved elsewhere. For example, the Department of the Treasury could handle federal student loans, and the Justice Department could investigate Title IX or civil-rights violations. This could potentially leave Education with only research and data-collection functions.

Regardless of what happens, the idea of tuition-free public college is dead for the next four years. Trump did discuss federal student loans on the campaign trail, though with often-conflicting messages. Earlier in the campaign cycle, there were calls to end the federal direct-loan program and return to the old system of bank-based lending that was underwritten by the federal government. This is unlikely to happen because of the price tag of reintroducing subsidies to lenders, as this was never a true free market. Trump is more likely to spend money in other areas (such as infrastructure plans or unwinding Obamacare) than bringing back guaranteed loans.

A more interesting market-based system for federal student loans would set different rates based on a student’s field of study in an effort to encourage students to major in high-demand fields. (Now all students receive the same rate regardless of major.) I don’t expect Congress to pass legislation setting different rates based on a student’s major, but risk-sharing legislation that could require colleges to pay back a portion of unpaid loans could have a similar effect. A similar premise also underlies income-share agreements (such as the pilot program at Purdue), in which the percentage of future income students pay is based on their major. The Trump administration is likely to look favorably upon income-share agreements as a way to hold colleges accountable through the private market.

Yet Trump has also discussed implementing a broad income-driven repayment system for students with federal loans. In a campaign speech in Ohio last month, he outlined a single repayment plan that would allow students to pay back 12.5 percent of their income for 15 years. This piece of Trump’s agenda could actually end up happening, as the idea enjoys broad support from both the research and policy communities. However, few details are included in this plan, and it has the potential to be very costly for taxpayers because most of the benefits would go to graduate students.

As for higher-education accountability, the Trump administration appears likely to take a step back, as Trump has discussed reducing regulatory burdens as a key higher-education goal. He cited a study from Vanderbilt University finding that the university spent $150 million on regulatory cost in a single year — even though 80 percent of this cost was related to research rather than student instruction. Colleges can expect fewer new regulations coming from the Department of Education over the next few years — and perhaps a pause to the growth in negotiated rule making as a key policy lever.

For-profit colleges and accreditors appear to be big winners in the Trump victory. The brunt of the Obama regulatory agenda, such as gainful-employment regulations and borrower defense-to-repayment rules, disproportionately affected this sector, while the Department of Education’s decision to revoke its recognition of one of the largest accreditors of for-profit colleges threatens to displace hundreds of thousands of students. For-profit colleges’ stock prices rose sharply on Wednesday, and, moving forward, accreditors may be able to avoid additional oversight from the Department of Education.

In the next several weeks, many of us will be paying close attention to whom president-elect Trump appoints to high-level positions in the Department of Education. Given the limited support of his campaign from many conservatives in the education world, Trump may have to make unconventional choices. If his appointees have a track record in higher-education policy, it could mean Trump is willing to delegate more to these people than in higher-profile policy areas such as immigration. It may be several months into the Trump administration before we have a good idea of his policy priorities, so stay tuned.