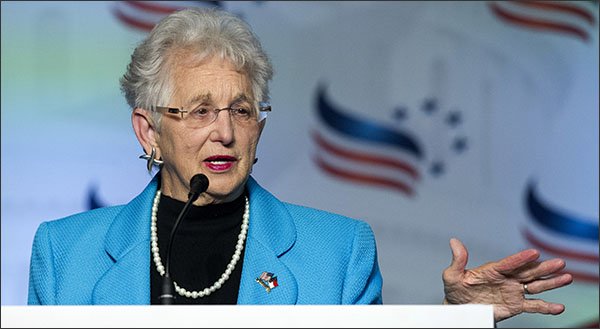 Rep. Virginia Foxx, R-N.C., said Wednesday that she will officially run to be chairwoman of the House education committee when the next session of Congress begins in 2017.

Foxx has long been rumored to be one of the top candidates to replace the outgoing chairman, Rep. John Kline, R-Minn., who is retiring. She currently leads the House panel’s subcommittee on higher education and workforce training. Before the election, she declined to say whether she would seek to take over the committee.

Regardless of whether she becomes the committee chairwoman, Foxx said she’s “thrilled” to get a chance to work with President-elect Donald Trump.

“The opportunities that this presents to us are so fantastic,” said Foxx, who was first elected in 2004.

In 2014, Foxx helped craft legislation that became a reauthorization of the Workforce Innovation and Opportunity Act. And she said that one of the committee’s top priorities will be a series of reauthorizations of education law, including the Higher Education Act and the Individuals With Disabilities Education Act. And when it comes to those issues, she plans to emphasize fiscal accountability.

“I would love to get the federal government out of education policy altogether. However, that’s not going to happen. So my position is, if we’re going to be involved, then we should have the money spent as well as it can be spent,” Foxx said of HEA, IDEA, and other issues.

Foxx said she’s committed to reasserting the rightful role of Congress and ensuring that future presidential administrations can’t overstep their role like she says President Barack Obama’s administration has. That includes curtailing things like the Obama administration’s approach to regulations for the Every Student Succeeds Act, according to Foxx. And she’s hopeful she can be part of an effort to reduce the overall bureaucracy in Washington.

“We have to push things down to the state and local level in order to reduce spending,” Foxx said.