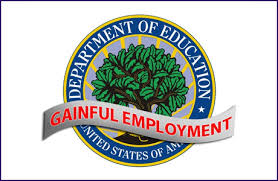 The Trump administration has taken its first shot at rules designed to protect students from expensive, low-quality colleges and career training programs.

Less than a month after Betsy DeVos was sworn in as its top official, the U.S. Department of Education announced Monday evening that it would delay until July 1 an effort to crack down on career training programs that load students up with unpayable debt.

The biggest winners: the more than 800 higher educational programs that claim to lead to “gainful employment” but flunked the department’s January excessive debt test—mostly for-profit art and cosmetology schools. These programs can now continue to recruit applicants (at least until July 1) without having to warn them about alumni’s oppressively high debt loads. The schools can also take this extra time to seek data showing that their graduates’ student loan bills are actually below the official “excessive debt” cutoff. That means bills must be no more than 12% of the average student’s gross earnings, as reported to the Social Security Administration, and no more than 30% of their discretionary income.

That means, for example, that students considering entering, say, the Art Institute of Pittsburgh’s two-year Associate’s program in graphic design won’t necessarily be warned that the typical graduate of the program has taken on about $40,000 in debt, but finds a job paying only about $22,000 a year. The monthly financial reality for such graduates is grim. Their before-tax monthly salary works out to about $1,900. The monthly payments on a standard 10-year student loan repayment plan top $400 – or more than 20% of their gross earnings.

The department said it would use the extra time to “further review the [Gainful Employment] regulations and their implementation.”

The action puts the brakes on one of many last-minute moves by the Obama administration. In January, the Department of Education issued an analysis of the earnings and student debt levels of more than 8,600 higher education programs that offer professional certificates or other career training, and found that about 800 programs — including a few graduate arts programs run by elite schools such as Harvard and Johns Hopkins — had alumni whose student loans exceeded its cutoff for excessive debt.

Such programs would thus run afoul of the Gainful Employment regulations, under which any career program whose alumni debt loads were deemed excessive for two years out of three would lose access to federal financial aid. That would amount to a death blow to most career programs, where federal student loans and Pell Grants tend to make up the vast majority of funding.

Former members of the Obama administration expressed concern on Tuesday that the delay portended a broader dismantling of consumer protections for college students. “This is just the first step,” warned Ben Miller, senior director for postsecondary education at the Center American Progress and who served in the Department of Education under President Obama.

Shortly after his election, President Donald Trump settled fraud charges leveled by former students of his for-profit Trump University, Miller noted. “I find it hard to believe he would suddenly view consumer protections as a worthwhile goal,” Miller said.

Secretary DeVos has not publicly provided any specific plans for higher education, and she did not respond to a request for comment emailed to the Department’s press office Monday afternoon.

But Republican members of Congress and other members of the Trump administration have said they want to rein in the Consumer Financial Protection Bureau, which among other things has cracked down on abusive student loan collectors.

Steve Gunderson, president of Career Education Colleges and Universities — the largest trade association of for-profit colleges — says he also hopes the new administration addresses other Obama-era actions on college. One that he’d like to have reconsidered: the new “defense to repayment” rules, which can force schools to bear at least some of the repayment costs of loans of students who can show they’ve been defrauded.

Officials at schools affected by the new regulations say that a pause — or even cancellation — is needed. The American Association of Cosmetology Schools last month sued to block the Gainful Education rules, arguing that the department ignored the reality that many of their graduates get tips that aren’t reported to the Social Security Administration, and so actually earn enough to pay off their loans. Now these schools will have more time to survey their graduates, in the hopes of proving their alumni are more financially successful than would be indicated by their paychecks.

Charles Riser, owner of three franchised Paul Mitchell cosmetology schools in Maryland and Florida that have passed the new test, says that other franchisees who flunked are spending a lot of time and money surveying their alumni to gather evidence for an appeal. About two-thirds of the schools, he says, have found their alumni are pocketing significantly more than they report to the government. The new regulations are an expensive hassle for operators of small for-profit colleges, he says. And he argues that the rules “are not needed,” because existing laws protect students sufficiently.

Anti-fraud regulations, for example, led to the shutdown of Corinthian Colleges, he notes. If the rules are going to continue, he argues it would be fairer if they applied to all college programs, not just career programs.

While Washington battles over the regulations, anyone considering any kind of professional or certificate program will have to do their own homework if they want to avoid debt-trap schools. You can look up the programs you’re considering on a downloadable spreadsheet available here showing the “debt-to-earnings annual rate” of 8,637 career programs. The Department of Education has ruled that any debt rate above 12 is excessive, and above 8 is in the “danger zone.”

Trustee prepares for next round in ITT bankruptcy