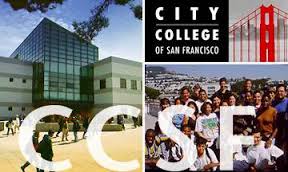 Is the Worst Over at CCSF?

City College of San Francisco is struggling with money woes, dwindling enrollment and a long-running accreditation crisis, but many in the state say the college is changing for the better.

It’s been a rocky few years for City College of San Francisco.

But while uncertainty surrounding the two-year institution’s accreditation status casts a long shadow, there’s some optimism from officials across the state that despite financial issues and decreasing enrollment, things are beginning to look up.

“We have been working hard in the last two years, not just on the accreditation issues, but the college at large,” Susan Lamb, the college’s interim chancellor, said in an interview. “We are a different college from where we were two or four years ago … part of the reason we feel confident about having a successful accreditation is we’re a different college right now.”

Most recently CCSF has faced a series of academic and program cuts proposed by the administration and a loss in state funding. But City College has been working both to improve its internal operations and to strengthen partnerships in the community, Lamb said.

Unlike in past years, City College has focused on creating STEM-related internships with the business community, working with the city government and local high schools, and seeking to become more efficient and accountable in an effort to drive up enrollments and rebuild its budget for the future.

Those changes come at an important time, because City College is facing a $35 million drop in funding from the state and more recently agreed to repay California’s government about $40 million over 10 years for failing to meet state reporting requirements about students who had received supplemental online education. An internal audit found that in face-to-face classes that offered a supplemental distance education lab, City College failed to keep the right records for about 16,000 students who were taught between 2011 and 2014.

“It was a very small subset of classes, and we did self-report them and immediately stopped those supplemental labs in that way,” Lamb said.

Student records are among a number of internal operations the large two-year college has been working to improve, which has some state officials and other observers saying they are optimistic that CCSF is heading in the right direction.

“It seems in that context the school is already making changes,” said Phil Hill, an education technology consultant and higher education analyst who is based in California. “The fact that they self-reported the problem and agreed to repay the state during budget cuts, I see as signs that they are already trying to make hard changes, but it doesn’t mean everything is fixed.”

Still looming over the college is the accreditation crisis, which began in 2012 when the Accrediting Commission for Community and Junior Colleges sanctioned City College for a number of financial and administrative problems. Later this month the commission is scheduled to decide whether the college will retain its accreditation.

Hill said he’s seen recent improvements with City College’s administration. Since the accreditation crisis began, the college has experienced leadership turnover, including two interim chancellors, a permanent chancellor and a special trustee appointed by the state. The college is in the process of starting a search for a full-time chancellor.

“They have challenges with the faculty union and particularly the local group,” he said. “Are [the faculty union] willing to make enough difficult choices to make changes?”

The faculty union has been against a series of recent cuts to academic programming even as enrollment has fallen by more than 33 percent during the last seven years.

The union’s leadership places blame for the enrollment decline squarely on the accreditation crisis. They also are optimistic that once the crisis is over, enrollment can rebound and City College can move forward.

“There’s nothing wrong at City College that the accreditation crisis has not made worse,” said Tim Killikelli, president of the faculty union. “There was this idea that the college wouldn’t exist … what that has done has driven people away from the college, and you can see that in the low enrollment numbers, which in itself creates uncertainty in the college. If the college’s uncertainty would end, a lot of these issues around enrollment, which has to do with budgets, will improve.”

He said whatever financial challenges existed prior to the accreditation crisis didn’t have the same impact on enrollment or budgets as the accreditor’s sanctions.

The faculty union has fought hard to avoid classes being cut in part to drive up enrollment, Killikelli said, so that once the accreditation crisis is over City College will have plenty to offer potential students.

The opportunity to grow City College through a free tuition program offered in a partnership with the city of San Francisco is another reason some officials are optimistic about the institution’s prospects. The city is preparing to pay $9 million for the first year of the plan.

“We’ll get full accreditation, and with the free City College program, we think those will be critical in helping to grow the college,” said Killikelli.

In addition, the administration plans to generate more revenue with a land lease of college property to developers that is expected to bring in more money — about $400,000 per year — over a 75-year period to help with deferred maintenance issues. City College is also rebuilding or expanding partnerships with the city to offer police, fire and emergency medical technician training as well as a construction training and employment program, Lamb said. In addition, the college has formalized some rules around its governance structure so people understand their responsibilities better.

Some of the problems City College has worked to fix were ones the accrediting commission identified, said Lamb. Other fixes, however, including some of the improvements to the college’s internal operations and external partnerships, were independent of the ongoing feud with its accreditor.

But the college also must continue to prove to the larger California Community College System that it can fix itself.

“When the news broke about City College, we knew we had to do more to help colleges that are struggling with operations,” said Mario Rodriguez, the system’s vice chancellor for fiscal policy. “So the state gave us more money to develop an institutional effectiveness division for our colleges.”

The institutional effectiveness division provides an early-indicator system that alerts state leaders to problems with the accreditation, fiscal health or student outcomes at any one of its 113 colleges. Now, if those challenges arise, the system can send in teams of other college presidents or chief financial officers from across the state to help the institution, Rodriguez said.

And as far as the state system is concerned, despite the financial issues and the continuing enrollment problems, City College is on the right path.

“At minimum, it shows us — our office and the state — that they’re doing the right thing with their dollars and have the policies to adjust,” Rodriguez said.

For people who work at City College, however, there’s still plenty of wariness.

“Some people are very concerned, even to the point of conspiracy theory, about the class cuts and their effects on enrollment,” said Hal Huntsman, a math professor. “Others feel that we have to innovate and improve our offerings to prevent further cuts.”

In addition to the accreditation issue, because City College hasn’t had a permanent chancellor and administration for quite some time, the politics of that search could change everything, Huntsman said, adding that there’s also a new Board of Trustees and contention between the administration and faculty union.

“If [a new president] leads to a big shake-up, then the college is looking at instability for at least another few years,” he said. “On the ground, people have begun to be numb. There’s only so much worry and anxiety people can take before they begin to focus on the work in front of them and not think about the bigger issues … while there is some optimism, there’s also a lot of heads shaking and hands in the air.”

The college has a pretty good chance of keeping its accreditation, and eventually, arriving at a better place, Huntsman said.

“The focus has been all about accreditation, and that is a primary driver. But when the focus is on that, there’s not always the attention on the larger institution,” Lamb said. “The fact is this college is still serving the community in a variety of ways, and we excel nationally in a lot of ways.”