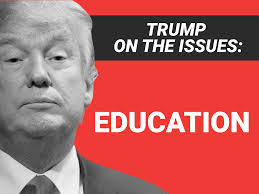 As the impact of the 2016 elections takes shape in statehouses, there are early signs that some policy proposals made by President-elect Donald J. Trump are prompting reactions from governors and state legislators.

For those who work on higher-education policy in Washington and in statehouses, the most common reaction to the new administration is uncertainty about the direction in which the president-elect and his nominee for education secretary, Betsy DeVos, may steer the Department of Education when they take office, in January.

“Since the election, the No. 1 answer I’ve given is … I don’t know,” Jennifer T. Poulakidas, vice president for congressional and governmental affairs at the Association of Public and Land-Grant Universities, said to a gathering of state higher-education lobbyists last week. The annual gathering, the Higher Education Government Relations Conference, is held by the land-grant association and three other groups: the American Association of State Colleges and Universities, the American Association of Community Colleges, and the Council for Advancement and Support of Higher Education.

“Donald Trump will be the leader of the Republican Party and set the tone for the next few years.”

But if, as Mr. Trump has promised, Congress and the Education Department roll back many of the regulations enacted under President Obama, state lawmakers may feel compelled to follow or reject the new administration’s lead, particularly on volatile issues like the treatment of undocumented immigrant students, who were brought into the country as children and are here without legal authorization, and of victims of sexual assault.State lawmakers in Georgia and Texas, for example, are already warning of consequences for public colleges that choose to act as sanctuaries for undocumented students if Mr. Trump does away with the protections the Obama administration extended to some of those students in 2012 under a policy called Deferred Action for Childhood Arrivals, or DACA. On the opposite side, state legislators in California and the governor of New York have spoken out against Mr. Trump’s ideas, warning of the divisive nature of his rhetoric and policy proposals.

Thomas L. Harnisch, director of state relations and policy analysis for the state-colleges association, said the president-elect could continue to be a big influence on state legislation and policy.

“Donald Trump will be the leader of the Republican Party and set the tone for the next few years. In states where Republicans have control, they could very much follow his lead,” Mr. Harnisch said. “In other states, this could embolden the opposition,” he said, referring in particular to California, where reaction against the incoming president has been strong.

Along with winning the presidency and retaining control of Congress, Republicans increased their numbers and control of state governments last month. The party now controls both the executive and legislative branches of government in half of the states. It holds the highest percentage of state legislative seats in nearly a century and controls every legislative chamber in the South, according to figures from the National Conference of State Legislatures.

Democrats, on the other hand, have lost more than 800 state legislative seats since President Obama took office, controlling both the legislative and executive branches in just six states after the November elections. The only bright spots for the party were winning both legislative chambers in Nevada, and an apparent victory in the North Carolina gubernatorial race, which is still undecided.Even with new gains for Republicans, Mr. Harnisch predicted that much of the legislative activity involving higher education will hew to themes similar to those of last year, including measures to rein in rising college costs. Those proposals include tuition freezes in exchange for increases in appropriations and incentives for producing higher graduation rates — for example, using performance-based funding, which awards state money on the basis of how well colleges achieve benchmarks for student achievement.

Another trend that will probably continue is a focus on policies and practices that put higher-education offerings in line with economic development and work-force needs, Mr. Harnisch said.

And although the idea of a national program to provide free or debt-free college is almost certainly dead at the federal level, states may continue to consider such plans, Mr. Harnisch said. Nearly two dozen states have considered such programs in recent years, and three states — Minnesota, Oregon and Tennessee — have enacted plans to make community-college tuition-free or nearly free, said the Education Commission of the States. Kentucky passed a plan to offer tuition-free community college, but Gov. Matt Bevin has delayed putting the program in place until next year.

Other trends in higher-education legislation, however, may become flashpoints during coming lawmaking sessions. While some 20 states now offer in-state tuition to unauthorized immigrant students, according to the association of state legislatures, that policy could come under more scrutiny in the wake of the election. A Florida legislator has introduced a bill to undo that state’s provision allowing undocumented students to pay in-state tuition, even though the measure passed in 2014 with bipartisan support and was praised by Gov. Rick Scott, a Republican.

State Sen. Greg Steube, the Republican who is the sponsor of the bill, told the Tampa Bay Times that illegal immigration was a major concern for his constituents this election season. It’s unclear, however, if his bill will attract significant support.

In other states, legislators are taking aim at public colleges that have pledged not to cooperate with Mr. Trump’s promised effort to deport unauthorized immigrant students. Georgia Rep. Earl Ehrhart, a Republican and chairman of his chamber’s higher-education-financing committee, has warned that he will seek to block state appropriations for any public colleges that do not cooperate with the federal government on this issue.

In Texas, Gov. Greg Abbott, a Republican, has issued the same warning to public colleges there.

How colleges deal with cases of sexual assault could also be a heated topic in some legislative sessions, with the expectation that the Trump administration could roll back the stricter federal guidance on colleges’ response to allegations of sexual misconduct.

Betsy DeVos, a wealthy Michigan philanthropist and longtime supporter of vouchers and charter schools, is President-elect Donald J. Trump’s choice to become the next secretary of education. See more recent articles from The Chronicle about Ms. DeVos and what might be ahead for the Education Department under her leadership.

What Does Betsy DeVos Have in Mind for Higher Ed?

Commentary: Expect DeVos to Apply Her Free-Market Outlook to Colleges

Commentary: DeVos Is Clearly No Pushover

Two states, California and New York, have enacted legislation requiring affirmative consent for sexual activity — “yes means yes” laws — which is generally preferred by groups that support the Obama administration’s crackdown on campus sexual assault through stricter enforcement of the gender-equity law known as Title IX.But there is growing backlash from some conservatives, who say colleges are not safeguarding the due-process rights of accused students. Virginia has passed a law requiring full-time administrators and faculty and staff members to report any instances of sexual assault to law-enforcement agencies. Similar bills have been introduced in several other states. They are generally opposed by victims’-rights groups, which argue that such measures inhibit rape survivors from coming forward.

Lobbyists for public colleges in some Republican-controlled states acknowledge that social issues, such as sexual assault, are a recurring topic of legislation, and that they, as advocates for colleges, they walk a fine line. Communication between legislators and colleges’ governing boards is key, said Amanda D. Seals, associate vice president for government relations at Kennesaw State University, in Georgia.

Lawmakers are generally hands-off in terms of higher education “as long as we stay in our boundaries,” she said. “The Georgia Board of Regents is doing a better job of meeting with legislators. Communication has to be two-way.”

In some states, budget concerns will keep lawmakers too occupied to worry about much else. Louisiana, which has slashed higher-education appropriations in recent years, will continue to struggle, said Rachel A. Kincaid, vice president for external affairs at the University of Louisiana system.

“We have a huge budget problem that eclipses everything else,” she said.

Eric Kelderman writes about money and accountability in higher education, including such areas as state policy, accreditation, and legal affairs. You can find him on Twitter @etkeld, or email him at eric.kelderman@chronicle.com.

Want a Job in Silicon Valley? Keep Away From Coding Schools - Bloomberg