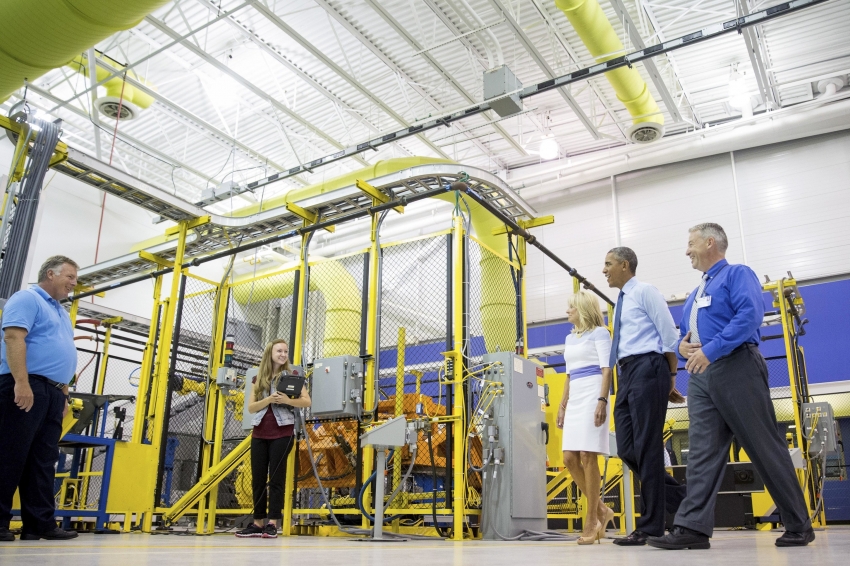 The Chronicle of Higher Education.

In July 2009, during the depths of the recession, President Obama traveled to Macomb County, Mich., to unveil a plan to invest $12 billion in the nation’s community colleges. The goal was to train workers and give the economy a much-needed jolt. Speaking at Macomb Community College, Mr. Obama called for preparation, in Michigan and elsewhere, for the “new jobs of the 21st century.”

“Time and again,” the president said, “when we placed our bet for the future on education, we have prospered as a result — by tapping the incredible innovative and generative potential of a skilled American work force.”

When Mr. Obama visited that summer, promising one way out of the recession, motor-vehicle manufacturing jobs in Michigan had just plunged 30 percent in a year.

Macomb County, north of Detroit, is the heart of the automotive industry and the birthplace of the Reagan Democrat. In 2008 it supported Mr. Obama with 53 percent of the vote.

His administration bet that retraining could rescue the blue-collar worker. Yet on Tuesday those workers loudly signaled their discontent with his legacy, with the government at large, and with the new economy. Donald Trump, the Republican nominee, won the county handily with 54 percent of the vote. The message that carried the day, and the 11-point swing that came with it, wasn’t about looking forward to a more educated future but harking back to a bustling, bygone era.

The election — in Macomb, in Michigan, and for America — was decided by those who felt the economy had passed them by. Mr. Trump beat his Democratic rival, Hillary Clinton, by 48,351 votes in Macomb County but only by 11,387 in all of Michigan.

Of course issues like job training and the decline of manufacturing alone did not swing Tuesday’s vote. Nor is the outcome a rejection of what college has to offer. Rather, seen through the lens of Macomb County, this election may suggest that as a tool for economic improvement and social change, higher education has its limits.

In the heyday of Detroit’s auto industry, Macomb Community College fed the major car manufacturers. At one point, it supplied Chrysler with 70 percent of its apprentices, training them as machinists, electricians, and sheet-metal workers.

Many good jobs then could be had straight out of high school, says Charles Ballard, an economics professor at Michigan State University and director of the university’s State of the State Survey. “Michigan,” he says, “was where the middle class was invented.”

But with the rise of competitive Asian carmakers in the 1970s and ‘80s, the fate of the American auto industry, and with it Macomb County’s, began to turn. Mr. Ballard, who moved to Michigan in 1983, recalls groups of workers chipping in to buy a car manufactured in Japan — to take a sledgehammer to it as a form of public protest.

In the last 40 years, the people who have lost the most economic ground are the very workers who commuted every day from Macomb’s suburbs to the auto-factory floors, Mr. Ballard says: white men with just a high-school degree. The average American man makes less today than did his father or grandfather, Mr. Ballard says. “It’s the largest economic phenomenon of my lifetime.”

The pace of decline in manufacturing accelerated after 2000, says Donald R. Grimes, an economist at the University of Michigan’s Institute for Research on Labor, Employment, and the Economy. Rock bottom, he says, was 2009, the year Mr. Obama visited the state to cast community college as a solution — and the year the federal government bailed out the auto industry, extending an emergency, taxpayer-funded line of credit to carmakers to keep them from going under. Unemployment rates in and around Detroit and its suburbs had approached 15 percent.

Since 2010, there’s been some recovery. Unemployment rates in Macomb today hover around 5 percent, just above the national average.

But though jobs have returned, wages have not rebounded. Filling the gap have been positions in fields like retail and health care that offer comparatively low paychecks. Higher-wage jobs have shifted almost exclusively to cities and highly educated communities, including college towns.

Macomb County, where just 23 percent of adults have a college degree, six points below the national average, falls on the hard-luck side of that divide.

When Mr. Obama went to Michigan, it wasn’t simply because the staggering auto industry provided a stark backdrop for his proposal to retool the economy through education. It was also because Macomb Community College had long been seen as a leader in work-force development and worker retraining.

The college offers a range of programs, from weeks-long boot camps to full degrees, to help local workers transition from old-school automotive jobs to high-tech fields like advanced manufacturing. Macomb also offers more-traditional fare, such as nursing and accounting, for those who are searching for jobs beyond the auto industry.

Work-force-training programs are booming, says Joseph L. Petrosky, dean of engineering and advanced technology, citing the success of one effort in particular, through the Michigan Coalition for Advanced Manufacturing, that has placed 271 students in jobs since 2014.

But how realistic is it to think that such programs can help the vast swath of older workers, the less educated, and the flat-out poor? Not everyone has the resources, time, or interest to change course.

If the president’s community-college plan promised a brighter future, many people did not feel his message of economic mobility applied to them. They “just didn’t see themselves at the gateway of opportunity,” says James Jacobs, president of Macomb Community College. “There were some people who were just left behind.”

Though many workers have been displaced after two decades or more, those who enroll at the community college are disproportionately at the beginning of their careers, Mr. Jacobs says. That’s especially true for programs in advanced and technical fields, those that offer a fatter paycheck but require a bigger investment of time up front.

In some ways, older workers’ decisions not to go back to school are rational, Mr. Jacobs says. Is it realistic, he asks, for a 55-year-old to enroll in a two- or three-year advanced-manufacturing program? Or to train for years to become a nurse? For those workers, it might make sense to trade lower wages — as a home health aide or Walmart greeter — for an immediate paycheck.

Another limit to colleges’ reach, says Luann Dunsford, chief executive of the Michigan Works Association, the state’s work-force-development system, is the rise in the working poor. She means people who are working two to three jobs, without child care or reliable transportation. To leave their jobs and return to school for retraining, she says, they need more financial and other support.

The results of Tuesday’s elections in Michigan and across the country have no simple explanation, Ms. Dunsford says. But she thinks the outcome signaled a worry that the status quo isn’t working, and the middle class is shrinking: “I just feel like it was more of a cry for change than anything.”

But it’s not a new direction that voters like those in Macomb want, says Mr. Ballard, the Michigan State professor. What they’re after, he says, is a return to the good old days.

“They say, ‘I don’t want to go back to school. I want my old job back. I want things to go back to the way it was,’” he says. “There is nostalgia. And there is anger.”

The problem is, those jobs will never come back. And the manufacturing jobs that do exist are different: increasingly high-tech. Mr. Grimes, the University of Michigan economist, says that while well intentioned, it may not have been realistic to bank on worker retraining to rescue Michigan’s economy.

Today’s well-paid manufacturing jobs, he says, almost by definition are scarcer than the factory jobs they replace. So, more jobs at lower wages or fewer jobs at higher wages. Neither option is attractive, Mr. Grimes says. “I guess that’s why they call economics the gloomy science.”

At Macomb seven years ago, Mr. Obama held out the promise of college while seeming to acknowledge its inadequacies. His remarks to local residents were more prophetic than he could have known.

“Now, I know that for a long time there have been politicians who have spoken of training as a silver bullet and college as a cure-all,” he told the crowd. “It’s not, and we know that.

“I can’t tell you how many workers who’ve been laid off, you talk to them about training and they say, ‘Training for what?’ So I understand the frustrations that a lot of people have.”