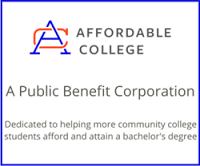 Losing credits and pursuing a four-year degree can be daunting and expensive for some community college students.

But a new public benefit corporation is hoping to ease the transfer process for community college students and drive four-year institutions to compete for these students.

The Affordable College Public Benefit Corporation is a network, marketplace and app that helps students transfer from community colleges with more credits to the university that fits their career and degree goals.

“Students need the information about the value of their credit when they enroll at their community college,” said Sean O’Brien, Affordable College founder. “So we give students information about what course they should take to lead to a degree without any credit loss.”

Reaching a four-year degree is the end goal for a large majority of community college students, with 81 percent of incoming two-year students indicating they plan to earn a bachelor’s degree or higher. However, only 33 percent of those students actually transfer to a four-year institution within six years, and only 14 percent earn a bachelor’s degree within six years, according to the Community College Research Center at Columbia University’s Teachers College.

Yet somewhere along the way, they never complete the transfer process. One reason could be losing hard-earned credits that don’t transfer to the university.

“When you find out your credits aren’t going to transfer, are you less likely to transfer when you’re a semester or two in? There’s a lot of layers to it,” O’Brien said.

Affordable College is partnering with community colleges, which then present the app to their students. Those students can input the degree path they’re interested in and the university they’re considering transferring to, and the app will show how many of the credits they’ve accumulated could be lost. Even if they haven’t started earning credits in their community college courses just yet, these students can view how well the degree paths at the two-year institution connect to the universities that have also partnered with Affordable College. So far, a few community colleges and universities have signed up for the service.

“The challenge our students find is understanding the wealth of information available to them, and that’s where Affordable College comes in,” said Julie White, a senior vice president for student engagement and learning support at Onondaga.

The New York community college has more than 70 transfer options, and while there are workshops and advisers offered by the college, there’s still a need to get as much information as possible to students. After all two-thirds of the college’s approximately 12,000 students enroll to potentially transfer, White said.

O’Brien sees Affordable College as building on the guided pathways work happening at colleges across the country, only through these partnerships they’re putting the information in front of students.

On the other side of the equation are the universities, which pay a fee to Affordable College to market their degree programs to the community college students researching their transfer options. O’Brien wouldn’t disclose how much the fee costs but said there would be multiple options available to four-year institutions. Those institutions would essentially be driven to participate in Affordable College in order to remain competitive with their peers. As for the community colleges, they would receive a share of the revenue for each successful transfer, he said.

“Universities are competing harder for students than they ever had to,” O’Brien said.

Take, for instance, the exclusive partnership between a New Jersey community college and a public university that has upset other four-year institutions in the area.

Universities are also realizing that many of their students are transfers and there are benefits in those students being “college ready” over traditional incoming students, said Davis Jenkins, senior research associate at CCRC.

“It’s astounding how complicated the process is for students,” Jenkins said. “They’re taking credits up the wazoo that don’t count and don’t transfer, and in some cases it’s benign neglect on the part of universities and community colleges, but where there are these business and political incentives across the country, you’re starting to see this happen.”

The competition for transfers is more apparent among regional public universities and less selective private colleges, which are often going after the same students, including transfers, he said.

“We are all feeling the effects of demographic shifts that cause enrollment to decrease somewhat, and many colleges and universities are feeling that in New York State and across the nation,” White said. “In general colleges and universities are interested in our students because they tend to do better and retain at higher rates than native students, and that’s certainly true for community colleges nationally.”

But recruiting transfer students can be costly.

“Sending advisers out and spending time ideally getting faculty together and building relationships is expensive,” Jenkins said, adding that the cost, however, hasn’t hindered colleges like University of Central Florida, Florida International University and Arizona State University from going after transfers. “It’s difficult to do unless you have an intermediary helping you.”

Affordable College shares its aggregate data with the colleges and universities so they’re able to see what they’re offering versus what students are interested in, as well as how they can best attract or develop programs for their transfer students.

And while most community college students interested in transfer are place bound, nearly one in fivestudents who started at a two-year institution transfer across state lines, according to the National Student Clearinghouse.

“We’re trying to solve a problem, and that dynamic will serve the students and the community colleges and universities and ultimately create higher levels of transfer and more completion,” O’Brien said.