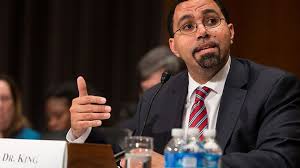 U.S. Education Secretary John King Jr. last week affirmed an administrative judge’s March ruling that relieved now-defunct Decker College of a $31.6 million repayment the Education Department demanded the for-profit institution make in 2005. The administrative judge had ruled that the department based its finding at that time on misinformation provided by Decker’s accreditor, the Council on Occupational Education, which Decker officials have argued helped push the college into bankruptcy and ultimately destroy it. The Federal Student Aid office — part of King’s own department — appealed the administrative judge’s ruling to the secretary.

King’s affirmation letter was unusually frank and expansive in explaining why he rejected his own agency’s appeal. The department’s decision is also likely to clear the way for a lawsuit — which has been stayed pending resolution of this situation — in which Decker is suing the accrediting council over its misrepresentations. (Note: This item has been updated from an earlier version to correct some errors.)